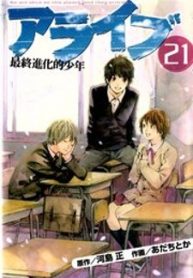 From Del Rey:
A strange virus is making its way around the globe, causing its victims to commit suicide. In less than a week, it’s become a lethal pandemic. But for a unique few, it does just the opposite… They evolve and become “Power Users.”
Taisuke Kanou and his best friend Hirose both become power users, but Hirose sides with Katsumata, a strange man with no regard for human life.
The story follows Kanou as he discovers the secret behind his powers, encounters reporters, other power users, and even the military, as he tries to get his friends back.